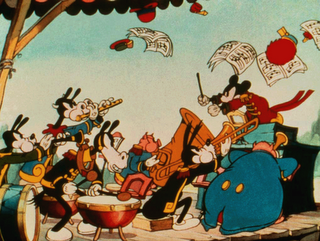 The first color Mickey Mouse cartoon, and still one of his most popular of the Classic Disney Shorts, "The Band Concert" is a 1935 cartoon in which Mickey attempts to conduct Gioachino Rossini's "William Tell Overture" at an outdoor picnic. But he is frequently interrupted by Donald Duck, who keeps distracting the band into playing "Turkey in the Straw" with his infinite arsenal of fifes. Hilarity Ensues.

"The Band Concert" provides examples of: