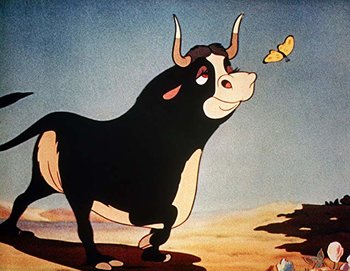 Ferdinand the Bull is a 1938 animated short film (8 minutes) directed by Dick Rickard, produced by Walt Disney as one of the Silly Symphonies.

A bull named Ferdinand is a gentle soul. While all the other bulls like to butt heads and fight, Ferdinand wants only to sit and smell the flowers. The great ambition of most of the bulls is to compete in the bullfighting ring in Madrid, but not Ferdinand. However, when the bullfighting scouts come to inspect the bulls, Ferdinand gets stung by a bee. The rampage he goes on leads the scouts to believe he is prime bullfighting material, and they take him to the ring, marketing him as "Ferdinand the Fierce". But he remains a gentle soul.

Based on a children's book called The Story of Ferdinand. Nearly 80 years after this short, the book was again adapted into an animated feature called Ferdinand, by a company that would coincidentally be purchased by Disney shortly afterwards.