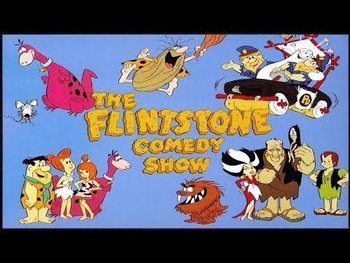 The Flintstone Comedy Show was a Saturday Morning Cartoon on NBC that aired from 1980 to 1982. The Flintstones spin-off featured multiple segments starring different characters, including Canon Immigrant characters the Shmoo (from prior Flintstones series Fred and Barney Meet the Shmoo and the comic strip Li'l Abner) and Captain Caveman.

The Frankenstones segments provide examples of:

The Dino and Cavemouse segments provide examples of: