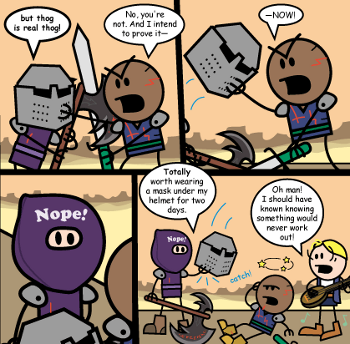 This can be done by individuals or organizations, and it can be done in a physical, social or metaphorical sense. Easily combined with a Gambit Pileup. Popular in the world of Ancient Conspiracy.

Characters may describe such puzzling intrigue as "A Riddle Wrapped in a Mystery Inside an Enigma."

Contrast Secret Identity Identity, where there's only one secret identity but it's becoming the person's real identity. Compare Second Super-Identity, when someone has more than one costumed identities, and Infraction Distraction. If pretending to be the opposite sex in one layer is part of the deception it may involve Recursive Crossdressing. See also Double Reverse Quadruple Agent.

Agent P gets unmasked as Ducky Momo to protect his secret identity.

Alternative Title(s): Mask Behind The Mask

Agent P gets unmasked as Ducky Momo to protect his secret identity.