Just For Fun / Robby the Robot 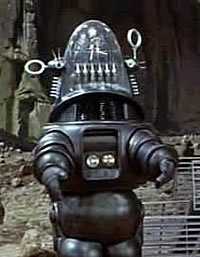 Robby the Robot in his most recognizable performance.
Robby The Robot is an actor whose breakout role was the 1956 film Forbidden Planet, where he played himself. He has since appeared in many other films and television series such as The Invisible Boy, The Thin Man, The Addams Family, and The Twilight Zone (1959).
Advertisement:

He has not appeared since the 2000s due to his alcoholism and cycles of rehab, and seems to have mostly gone into commercial work. He's in the Robot Hall of Fame

alongside his contemporaries Astro Boy and Gort, as well as others. His design gets a pretty big Shout-Out on the Protectrons of the Fallout game series.