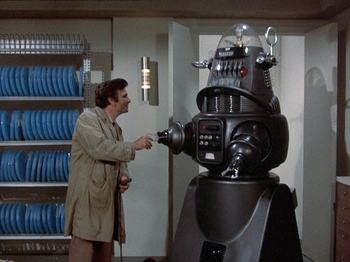 "Mind over Mayhem" is the sixth episode of the third season of Columbo.

Dr. Marshall Cahill (Jose Ferrer) is the director of a cybernetics research institute that conducts studies in a wide variety of fields, from military combat to drugs to natural gas-powered cars to advanced robotics. Unfortunately for Cahill, one of the senior scientists at the institute, Professor Howard Nicholson (Lew Ayres) has some bad news. It seems that Cahill's son Neil (Robert Walker Jr.), who is about to receive a major scientific award for his research on "molecular matter", actually plagiarized everything from another scientist, the recently deceased Carl Finch. Marshall begs Howard to keep quiet, to avoid disgrace for Neil and embarrassment for the institute, but Howard, who cares about scientific integrity, says that if Neil doesn't confess he will expose him.

Marshall resolves on murder, and sneaks out with one of the institute's natural gas cars. Soon after Howard's much younger wife Margaret (Jessica Walter, nearly 30 years before Arrested Development) leaves to teach a class, Marshall catches Howard in his driveway and runs him down with the car. He attempts to stage a scene suggesting that Howard was killed by an unknown party who absconded with the heroin that Howard kept in his lab for research. However, Lt. Columbo, who sees a match in the ashtray that shouldn't be there and a shoe polish scuff mark on the wall, isn't fooled.