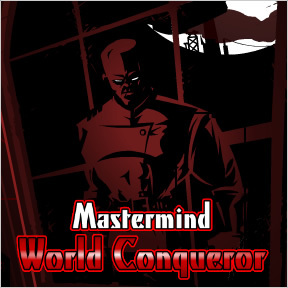 Mastermind: World Conqueror is an online RTS/Tower Defense game made by Michael Swain (not Swaim) based off the Mastermind flash series. Play it here

The plot is this. You are The Mastermind. You wanna conquer the world. But you are just starting from your abandoned warehouse.

Throughout the course of the game, you go from living in your abandoned warehouse, to owning a Moonbase, multiple evil businesses, hordes of Mooks, and a council of advisors and patsies, along with a specialist bodyguard, using stolen funds, kidnapping, and pretty much whatever you can, as long as it's evil, to conquer the world.

The Game provides examples of: