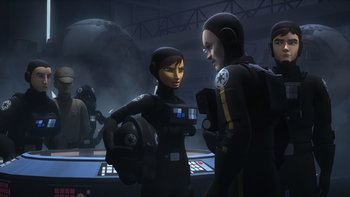 '"Listen carefully, cadets. You are here because the Empire sees the potential in you to join the ranks of its most elite pilots. Most of you will fail. Whatever you have achieved before means nothing. Here, only the best survive."
— Commandant Argin Relik
Advertisement:

The Rebellion is in desperate need of more pilots. With intel from a new rebel informant, Sabine goes undercover as a cadet in an elite Imperial flight academy, the Skystrike Academy, to help free several young pilots who want to defect to the Rebellion; including the confident and gifted Wedge Antilles.