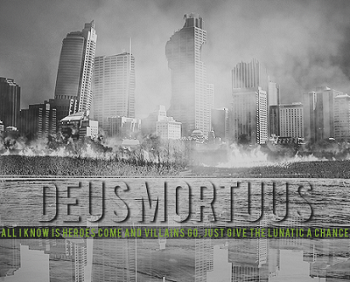 is a Play-by-Post Game set within an alternate timeline of our own Earth in 2012. While the main cities of Earth to be played in are limited to a certain extent (London, Irkutsk, Johannesburg, Rome, Barcelona, Hong Kong, Washington D.C., Rio de Janeiro, Helsinki, and Vatican City), players are also given the option to use a board titled "Elsewhere" in order to play out encounters in other places. The meat of the story, however, does not take place on Earth at all though. Instead, characters are able to pass through "tears" to travel to the land of fire and brimstone, Hell. While the place is essentially the Hell we all know and love, in this game it is referred to as Inferis. Characters range from your typical civilian all the way to Lucifer himself. The gameplay is rather unique in that players are given several different character types to choose from when creating their muses, each with their own set of powers, default skills, allowed equipment, and weaknesses. Powers gained for each level up, and those you have at level one, must be explained thoroughly as well.Example One could not have overall pyrokinesis as an ability, but could use fireballs, summon walls of flame, put out flames, etc.

Demon Hunters are capable of learning abilities known as Evocations while in Inferis. These can manifest as anything really. Vehicles, weapons, skills and abilities, the possibilities are endless note within reason. It is possible to obtain ten of these abilities once you have reached level four. There is a specific gene passed along from parents which determines whether or not someone will be a Demon Hunter, and typically only arises in a family with said gene within their bloodline. This gene is what allows Demon Hunters to move between Earth and Inferis through tears with ease.

Templars are members of an Illuminati-esque organization by the same name. Their powers while in Inferis, unlike those of Demon Hunters, are gained through use of implanted technology known as Augments. Also unlike Demon Hunters, these are only able to manifest as skills and abilities, though Templars have no need to manifest weapons or equipment to begin with. Their organization, able to keep itself a secret to the general public, is more than capable of funding the necessary equipment for them to use, along with devices known as CrossGears which allow them to utilize tears much like Demon Hunters to travel into Inferis.

Demons, a character type that may or may not (depending on your viewpoint) be the central antagonists, are playable as well. They come in all shapes and sizes, varying levels of intelligence, and also, like other classes, different powers which are called Apparatuses. Apparatuses are special in that they are the only means for demons to obtain weaponry and equipment while in Inferis (though when possessing a human this is different entirely). They can also be in the form of skills or abilities, and at level four Demons have a maximum of six Apparatuses. While unable to cross into Earth from Inferis by any means, they can possess humans in order to walk among the populace for a short time. There are a group of particularly powerful demons, ten in number, known as Archdemons. They each rule a specific "sphere" of Inferis as their kingdom, and include Lucifer in their number.

Ritualists are special in that they develop a spiritual bond with Demons, which allows them to remain possessed for longer amounts of time than when a normal human is possessed by a demon. While possessed they are able to use abilities known as Amalgams on Earth which manifest as weaponry or skills. While in Inferis, the Ritualist and demon(s) they have bonded with walk separately, but are able to merge together into a form known as an Inferis Morph. These are usually quite powerful, and can surpass most natural demons in strength.

Civilians are exactly what they are named. Normal, everyday people that tend to have no idea what's going on with the main cast and Inferis. Once they do, however, expect hilarity to ensue.