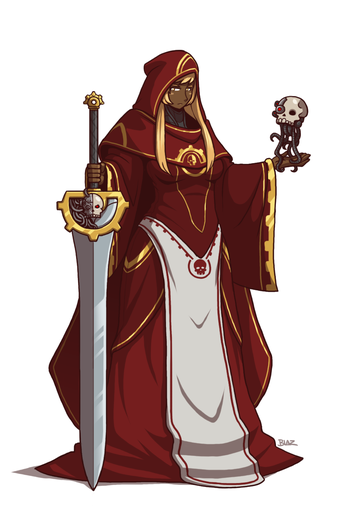 Deus Ex Mechanicus Reboot is a sci-fi Quest set in the Warhammer 40,000 universe.

It is the dawn of the 42nd millenium. The Imperium of man remains pressed on all sides by armies of traitors, heretics and xenos. Though the losses suffered during the 13th Black Crusade has left hundreds of sectors sapped of vital military power, and the Night of a Thousand Rebellions has sent it reeling, it continues to fight unabated, throwing tens of thousands of men into the grinder to die for the Emperor on a daily basis.

The ones who ensure that the Imperium retains the arsenal it needs to hold the darkness at bay are the Adeptus Mechanicus, the cult of the Machine. With their near monopoly on advanced technologies, their faith in the Machine God and the sheer industrial strength of their Forge Worlds, they produce nearly every weapon wielded by Imperial military organizations, be they the Imperial Guard, the Sisters of Battle, the Space Marines, or the Imperial Navy.

You are a member of the Mechanicus. Raised to believe in the gospel of the machine and taught the secrets of technology from a young age, you rose through the ranks of this theocratic-technocracy, eventually reaching the rank of Magos. For such were your achievements in the Search For Knowledge.

However, you would never have expected the task that has been handed to you now. A new Forge World is to be made, or at least the foundations of one. A new world for the Mechanicus, to expand it’s power, increase the production of the Imperium, and further the Machine Cult’s never-ending quest for knowledge. You have been chosen to establish and lead it.

on Spacebattles, this quest takes place in the 42nd millennium's first centuries. The quest is played from the perspective of Akadia Lethe, a recently ascended Archmagos with the mission to build the foundations of a new Forge World on a planet of the Karatus Sector called Callamus.

Things kind of escalate from that point on.

The first thread began on September 27th, 2014 and can be found here

. After the thread exceeded SpaceBattles.com page limit, the second thread was founded here

. Unfortunately, there have been no updates to the story since 2017.