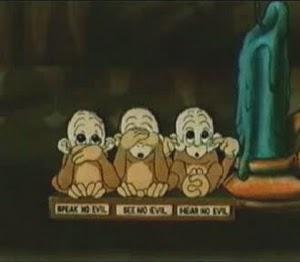 "Good Little Monkeys" was the tenth cartoon short in the Metro-Goldwyn-Mayer Happy Harmonies series produced (and in this case directed) by Harman and Ising. It starred the Monkey Morality Pose simians of the title and their unforgettable theme song. The short, which premiered on April 13, 1935, followed the then common pattern of various inanimate objects, such as toys, ornaments, advertisements, or book illustrations, coming to life and frolicking while no humans are around.

Out of a copy of Dante's Inferno comes a red devil, creeping up on the Goody Goody Monkeys, who sing of their unshakable morals. The devil rings a gong, to summon various book characters, etc., to make merry, and invites the monkeys to join the fun; they indignantly refuse, until he begins to tempt them with peanuts — to a Latin rhythm. The monkeys follow the peanut trail, until the devil summons a scantily clad belly dancer, to the prudish primates' horror. As the fiend attempts to seize the monkeys, all the other characters join together to rescue them; the devil dives back into the Inferno, and all cheer as the monkeys resume their places.

The cartoon was popular enough to inspire two sequels: The first, Pipe Dreams (February 5, 1938), featuring the monkeys smoking their way into nicotine visions, and the second, Art Gallery (May 13, 1939), having the monkeys induced by the statue of the Emperor Nero to get drunk on lighter fluid (!) and burn down the gallery's painted "Rome" — and most of the other paintings besides.