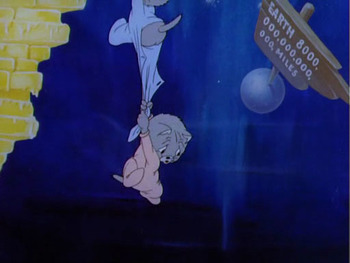 The Milky Way is a 1940 animated short film from Metro-Goldwyn-Mayer, directed by Rudolf Ising.

The three little kittens of "three little kittens have lost their mittens" nursery rhyme fame are sent to bed without dinner and without milk. As they are getting ready for bed and missing their milk, one kitten gets an idea. The three kittens hop in a basket and use three balloons to take them to the Milky Way, where there is, of course, a great abundance of milk.

Notable as being the first non-Disney cartoon to win the Academy Award for Best Animated Short Film.