Western Animation / It's Got Me Again! 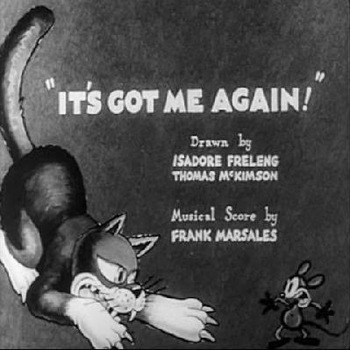 It's Got Me Again! is a 1931 Merrie Melodies animated short (7 minutes) directed by Rudolf Ising.

A mouse adventures out of its hole and finds a house without any people in it. After successfully snatching a piece of cheese out of the mousetrap, the mouse summons his buddies—and there are a lot of mice in the walls. All the mice come flooding out of the mouse hole to find a house that apparently belongs to musicians, as there are musical instruments scattered everywhere. The mice have one heck of a party, singing and dancing, until a hungry cat shows up.

This short was produced only two years after the Warner Brothers animation studio started up. It does not have any of the iconic Looney Tunes characters (they hadn't been invented yet) and doesn't really look like a Warner Brothers cartoon. Friz Freleng, who would later become one of the busiest Looney Tunes directors, was an animator on this short.

This short is also notable for being the first short in the franchise to get an Academy Award nomination (ultimately losing the Oscar to Walt Disney's Flowers and Trees).