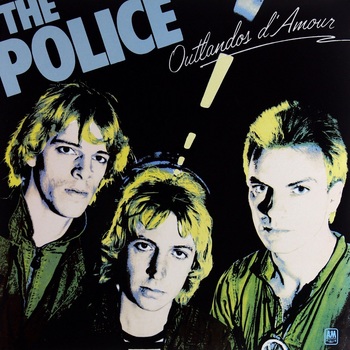 And I don't want to make a fuss about it
The only certain thing in life is death
I've called you so many times today
And I guess it's all true what your girlfriends say
That you don't ever want to see me again
And your brother's gonna kill me and he's six feet ten
I guess you'd call it cowardice
But I'm not prepared to go on like this
"Can't Stand Losing You"
Advertisement:

Outlandos D'Amour is the debut studio album by English-American Post-Punk/New Wave Music trio The Police. It was released through A&M Records on 2 November 1978.

Recorded intermittently over a six-month period during their studio's free time, the album marked the band's shift away from the straight Punk Rock of their debut single in favor of a reggae fusion direction that would bring the band to fame. The shift came at the behest at their manager (and drummer Stewart Copeland's brother), Miles Copeland, who was harshly negative towards the early punk angle but instantly fell in love with the throwaway track "Roxanne", pushing A&M Records to release it as a single. While it failed to chart, A&M were nevertheless confident enough to commission a follow-up single: the result, "Can't Stand Losing You", performed much better, reaching No. 42 on the UK Singles chart and becoming the band's first technical "hit" (even if it didn't crack the top 40), leading A&M to approve the rest of the album, which by then was already finished, for a release.

Despite the promise that the band's second single showed, Outlandos d'Amour ended up flopping upon its initial release, selling poorly in the band's native UK. However, the band's fortunes would be heavily improved in the United States, where "Roxanne" became an immediate Top 40 hit, if only just barely (peaking at No. 32 on the Hot 100), with the album itself reaching No. 23 on the Billboard 200. The American success of the album motivated A&M to reissue "Roxanne" in the UK in the spring of 1979, where it peaked at No. 12 this time; its other two singles would see further success, with "Can't Stand Losing You" and "So Lonely" respectively reaching No. 2 and No. 6. The album itself would also peak at No. 6 on the UK Albums chart off of this more successful second push, selling enough to be certified platinum by the BPI that November. Over time, the album would also go platinum in the US, Canada, France, and the Netherlands, as well as gold in Australia and Germany.

Outlandos d'Amour was supported by three singles: "Roxanne", "Can't Stand Losing You", and "So Lonely".

You don't have to trope your body to the night: