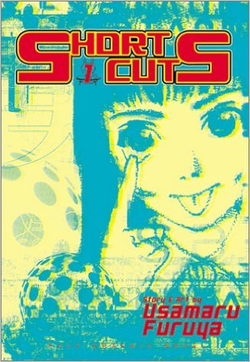 Short Cuts is a manga series by Usamaru Furuya about random events occurring in the day to day activities in this ordinary high school. The manga typically follows a Gag per day formula with most jokes being a page or two long. The jokes range from Black Comedy to Sex Comedy and everything in-between. The manga was published shortly in Young Sunday Magazine but was taken out shortly after. Currently, only two volumes have been released.

See Cromartie High School or The Ping-Pong Club for a similar series.

Definitely not for kids.

This Manga provides examples of: