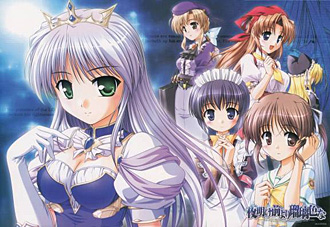 At some point in the past, colonists from Earth established the Kingdom of Sphere on the Moon. Tensions between the Lunarians and the Earthlings led to the Oedipus War, a conflict that left both sides badly mauled. Since that time, the Earth (now unified under the United Nations banner) and the Kingdom of Sphere have shared an uneasy peace...

Tatsuya Asagiri is enamored with the moon. Ever since he was very young and met a girl who claimed to be from the moon, he has always wanted to travel there. Fate then drops an almost literal meteor on him when it is revealed that, in an effort to further normalize relations between Earth and the Moon, the Princess of Sphere, Feena Fam Earthlight, will be staying at Tatsuya's house and attending his school as an exchange student...

The fourth game of Visual Novel maker August Soft, it has several iterations, including the original X-rated PC game (simply Yoake mae Yori Ruriiro Na), a manga (same title) a PS2 adaptation (subtitled ~Brighter than Dawning Blue~), an anime adaptation (subtitled ~Crescent Love~) directed by Masahiko Ohta, and an X-rated collection of side stories for the PC (subtitled ~Moonlight Cradle~). Sentai Filmworks used the title Brighter than the Dawning Blue for their English subtitled version of the anime. There's also an (technically incomplete) English Fan Translation for the PC port of ~Brighter than Dawning Blue~.

Tropes exclusive to the game versions: