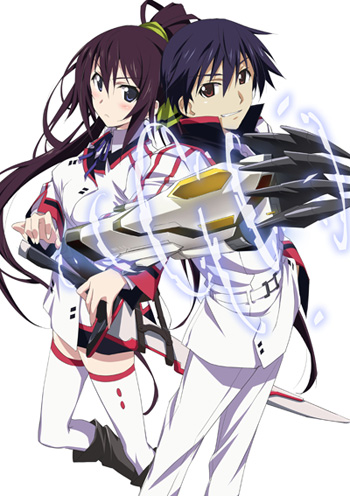 Sometime in the Future, a new exoskeleton called the Infinite Stratos (IS) system was developed in Japan and quickly demonstrated just how easily it could take out a variety of conventional military weapons. The weapon was soon adopted by several nations... save for one flaw — only women could pilot it. This shifted the social structure to favoring females over males, until Every Man Ichika Orimura becomes the first male to activate an IS and is soon thrust into a new life as a new student at the prestigious — and previously all-female — Infinite Stratos Academy.

However, his school life is filled with many hurdles and interesting characters. His Tsundere childhood friend Houki Shinonono is one of his classmates, but her sister Tabane is responsible for building the IS and Houki hates her for it. English Upper-Class Twit Cecilia Alcott hates weak men and has trouble finding a decent guy. Flat-chested (and not too happy about it) Chinese Genki Girl Huang Lingyin is Ichika's second childhood friend. From France, there's also Charlotte Dunois, briefly known as another male pilot who tries to be friendly and get close to Ichika before her gender is revealed... and she still wants to be friendly. Finally, German Super Soldier Laura Bodewig idolizes legendary IS pilot Chifuyu Orimura, who happens to be Ichika's older sister, and therefore hates him for ruining her idol's reputation. Oh, and naturally, there's an evil corporation that wants to steal his IS Core.

Ichika's high school life is about to get very interesting...

Infinite Stratos is a Light Novel Series by Izuru Yumizuru. As of 2018, there are 12 volumes released. The light novels were licensed for a North American release by J-Novel Club in February 2018 with the first volume getting chapter posted online as they're translated before a full ebook release on April 16, 2018. The series will conclude

with its thirteenth volume, with its release date yet to be revealed.

Infinite Stratos was adapted into an anime in January 2011, simulcast with The Anime Network

. There are two manga adaptations of the story: the first by Kenji Akaboshi, covering the entirety of Season 1; and the second a relaunch by Yuuki Homura. Season 2 aired as part of the fall 2013 anime season. It's also available on Crunchyroll's website.

Viewers living in the USA, Canada, Australia, UK, Ireland, and South Africa may watch it legally there. The anime is also licensed for release by Sentai Filmworks.

Less than 24 hours after season 2's final episode aired in Japan, it was announced that an OVA based on Volume 8 was in production. It was released on November 26, 2014. Trailer here.

A fighting game for the PC called Infinite Stratos Versus Colors was released on December 31, 2014. View the trailer here

Not related to Stratos 4. Nor to Lockon Stratos.

Warning! Both the main page and the character sheet have spoilers for the light novels as well as the anime. You Have Been Warned.