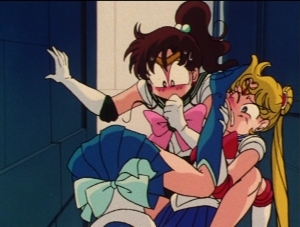 "There's so many fun things to do as adults."
—Sailor Neptune in the SuperS movie
Advertisement:

The North American’s English dubs (mostly the DiC dub, but Cloverway is also notorious) of Sailor Moon is mostly remembered for (badly) toning down anything that could be too sexual or violent for younger viewersnote (there's also some cases of Japanese text and references to Japanese culture being edited, but that's localization, not bowdlerization). Sexual references and slight bits of nudity, as well as violence (including scenes of attempted murder, suicide, and death) are edited wholesale, digitally altered, or rewritten to something more child-friendly.

On top of these changes, any references to homosexuality and transgender were edited and/or cut. Zoisite from the first season was originally a man in the Japanese version. In the DiC dub, Zoisite is a woman (yet her romantic interludes with Kunzitenote Malachite were more-or-less intact). Sailor Uranus and Neptune's relationship was changed into the both of them being cousins, but this failed because what was left in made the same-sex couple out to be ambiguously incestuous relatives – especially if you’ve never seen the original episodes of Sailor Moon S. And the biggest censorship of all: the countries that did air the final season (Sailor Stars) had to change the Sailor Starlights from men who transform into female Sailor Scouts to men who summon female equivalents of themselves to battle evil (or, in some cases, have the male characters voiced by and rewritten to be women from the start). The countries that didn't do this merely ended their run of Sailor Moon after Super S, which the creator wanted to happen anyway, as she knew other countries would have a problem with The Starlights.

Despite the big changes occurring around the world, the censors fortunately didn't catch everything...