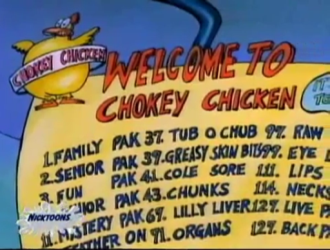 Somehow, this one managed to make it three seasons past the radar...though it did come back in the revival movie
"Mary had a steamboat, the steamboat had a bell, Mary went to heaven and the steamboat went to heeeey, Rocko... cattle!"

Despite being on Nickelodeon, a kids’ networknote though it should be noted that early 1990s Nickelodeon had the kind of edgy kids' programming that most other networks wouldn't allow, whether it's the gross and chaotic Ren and Stimpy or the scary, low-budget Are You Afraid of the Dark? or shows like Clarissa Explains It All or Salute Your Shorts that dealt with teen issues, such as puberty, crushes, parent issues, and friendship, Rocko's Modern Life had a virtual laundry list of "adult" jokes and innuendo that, for the most part, got by without the censors intervening. This show did a better, subtler job of getting away with these kind of jokes than its contemporaries at the time (including John Kricfalusi's The Ren & Stimpy Show, although that had a bigger emphasis on shock value) and is a forerunner (along with Animaniacs) to how most works from the late 1990s to the present (especially late 2000s/early 2010s Cartoon Network shows) get away with dubious content.