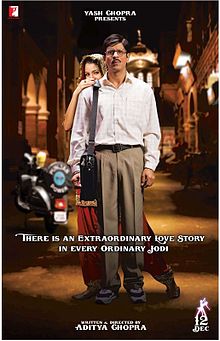 (A Match Made By God) is a 2008 romantic Hindi language film directed by Aditya Chopra and produced by Yash Raj Films. It stars Shah Rukh Khan, Anushka Sharma, and Vinay Pathak.
Advertisement:

Surinder Sahni (Shah Rukh Khan) is a shy and quiet office worker. While visiting his former professor, he meets the professor's daughter, a beautiful, vivacious young woman named Taani. It is Taani's wedding day, but due to unexpected events, Taani ends up alone in the world and married to Surinder instead of the man she had chosen for herself.

Taani tells Surinder that she will be unable to love him although she will do her best to be a good wife. Surinder soon realizes that he has fallen in love with Taani, but he keeps this fact to himself. He humbly enjoys the added attention he gets from Taani as she cooks his meals, takes care of his home, and packs his lunch in a tiffin bucket for him each day. In return, Suri treats her with great kindness, often taking her out to movies, and when she asks to take dance classes, he consents to that also. Their relationship remains platonic, and the two occupy separate bedrooms.

When Taani begins her dance classes, Surinder finds himself becoming discontented with the condition of his marriage. He asks his friend Bobby, a hairdresser, to give him a makeover so that Taani will fall in love with him. Hilarity ensues since Bobby and Surinder's ideas of what will transform Suri into a cool dude are decidedly over the top.

When Taani fails to recognize her husband in his new persona, Suri is tempted into assuming a double identity with hilarious and unexpected results.