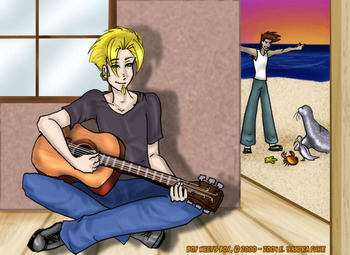 A romance comic from Stan Stanley (then going by the name Sandra K. Fuhr), which you can read here

The main plot focuses on Mikhael and Harley, along with the aptly named (to begin with) Boy Band, the fiendish Tybalt and the even more fiendish Tabitha, daughter of Satan. They have their share of adventures, especially emotional ones.

After it ended it immediately led into the spin-off series Friendly Hostility, focusing on two side-characters, Collin and Fox.

Not to be confused with the 2003 book by David Levithan, Boy Meets Boy.