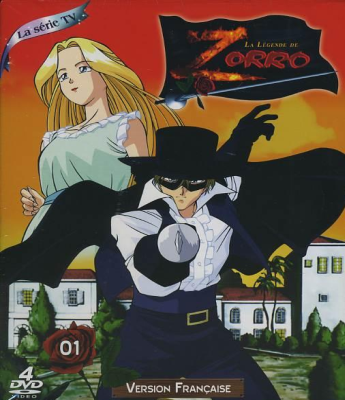 The French version of anime-Zorro is about to stab you!
Advertisement:

Kaiketsu Zorro (literally "Extraordinary Zorro," released in English as The Legend of Zorro) is a 1996 anime series based on the popular Zorro franchise. It was created through the collaborative work of Japanese studios Ashi Productions and Toho and Italian distributor Mondo TV. The series was broadcast on NHK in Japan.

As in most adaptations of Zorro, the premise of the anime is largely the same: in the late 18th century, Don Diego Vega, who has been pursuing his studies in Spain, gets a letter from his father Don Alejandro Vega, urging him to come home to California and help in quelling the tyranny of Spanish Army commandant Raymond, whose soldiers have been bullying the locals and extorting the wealthy landowners. Seeing an example of such bullying upon his arrival, Diego proceeds to don the masked identity of Zorro, establishing himself by rescuing a man who was condemned to death for speaking out against the Army, and earning the ire of Raymond and his lieutenant Gabriel in the process.

Diego is soon joined in his efforts by Bernard, a young servant boy who Diego had rescued from death years earlier and who has managed to deduce Diego's dual identity, and together they thwart the corrupt practices of the Army and the viciousness of local criminals, with Bernard donning a version of the Zorro costume and calling himself "Little Zorro" on occasion. As in most versions of the character, Diego must also act like a coward in order to avert any suspicion of him being Zorro, although this tactic earns him the disapproval of his father, as well as the disdain of his childhood sweetheart Lolita—who ironically falls in love with Zorro.

The series ran for one season of 52 episodes, though only 46 of them were aired in Japan.

Not to be confused with Kaiketsu Zorori, a children's story about an anthropomorphic fox.