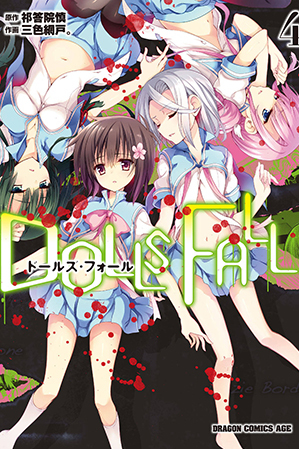 Lizzie Borden took an axe
And gave her mother forty whacks
When she saw what she had done
She gave her father forty-one
—Expect someone to die when this comes up.
Advertisement:

After the trial in 1893, Lizzie Borden took the name Paula and, along with childhood friend Carrie, started an orphanage, Mother of Garden, in 1912. She was actually very good at running it, until a mysterious man aware of her past visited one day. Fast forward to the present, Jiaiin Girls Dormitory in Kanekubi Town in Japan is an orphanage for gifted girls that has the new students completely harmlessly sign their contract with blood. How are the two connected? Through a trail of corpses to feed some magic box and a creepy lady that likes to bathe in blood and organs to keep herself young.

Main character Meiri Chibana lost her family to a fire on her 13th birthday. While traumatizing, it hasn't done anything to negatively affect her outlook on life. This makes her a person of interest to Chloe Zola, the headmistress of Jiaiin Girls Dormitory (where Meiri comes to live) and the successor of Lizzie Borden.

Calling Jiaiin Girls Dormitory an Orphanage of Fear is putting it mildly, as surviving it requires three years of both strength and luck and coming out without trauma is impossible. The dolls in "Dolls Fall" are the students, and "Dolls Fall" itself is the name of the "game" of who will survive the witch inhabiting the orphanage wall and who won't. The students only have the benefit that they are selected based on their ownership of a Possessed, a kind of superpower that is supposed to protect them, but it's not rare for students to die before they even discover the nature of their Possessed.

Dolls Fall is written by Makoto Kedouin, the same mind who came up with Corpse Party, and illustrated by Amido Sanshoku. There's some suggestion that Dolls Fall takes place in the same universe as Corpse Party, but it's its own franchise nonetheless. The manga was serialized in the shonen magazine Dragon Age from 2013 to 2015, and compiled into four volumes.