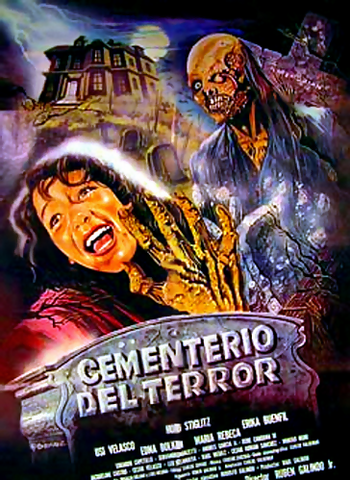 On the night of October 30, after being moments too late to save his latest victim, the police manage to shoot and kill a devil worshipper named Devlon, who murdered 17 people, including his parents. Knowing of Devlon's powers and skill at the dark arts, his psychiatrist, Dr. Camilo Cardan, demands the skeptical police captain Adam Ancira to cremate Devlon's remains immediately, going so far as to forge legal documents to do so. Now October 31st, three medical school students named Jorge, Oscar and Pedro trick their girlfriends Olivia, Mariana and Lena into thinking they're going to a luxurious party at a mansion, instead taking them to an abandoned house by a cemetery to party by themselves, unaware that this is Devlon's hideout. The ladies are not happy with this and refuse to party with the guys, and after an annoyed Jorge finds a book of black magic in the house's attic, the guys decide to scare the girls by stealing a corpse from the city morgue to have a pretend ritual to revive it.

At the same time, young teenager Tony goes out with his friends Usi and Anita and their respective little brothers Cesar and Raul to fulfill a dare of heading into the deepest part of the cemetery on Halloween night (Anita and Raul are also Captain Ancira's children). The medical students steal Devlon's body from the morgue, and after finding out that it's missing, Dr. Cardan swipes Captain Ancira's patrol car to search by himself. The three couples hold the ritual despite the protests of the girls, and unaware that it worked, they return to the abandoned house while the five children arrive at the cemetery. Now revived, Devlon sets out to take back his book and murder the people invading his home and cemetery, all while Dr. Cardan desperately tries to find Devlon and put a stop to him once and for all.

Cementerio del Terror was filmed with an extremely small budget and it is basically a hodge-podge of horror subgenres all put together with a heap of Narm and some pretty bad acting. In spite of this, or perhaps because of it, it became a hit in its native Mexico and considered a cult classic to this day, with slasher fans from other countries discovering it and holding it in high regard as schlocky B-Movie fun.