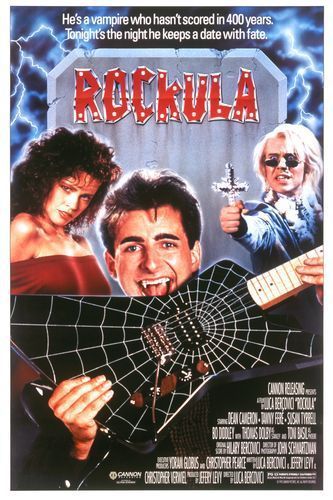 Rockula is a movie released by Cannon Films in 1990, and one can arguably call this a very.... unique.... film.

As the movie was in production in 1988, it's a quintessentially eighties movie in clothes, hair, makeup, and general vibe. The heartbeat of the film is the protagonist, Ralph La Vie — a nebbishy, insecure, low rent vampire played by Dean Cameron, of Summer School and Ski School fame. Ralph doesn't display a whole lot of vampiricity; and, for someone supposed to be 400 years old, he's decidedly lacking in any of the sort of wisdom, knowledge, or even perspective which comes with age and experience. As such, this vampire nerd fittingly lives with his mother, Phoebe La Vie — gamely played by Toni Basil, well known for her Mickey song. On the other hand, both Ralph and his mother have obtrusive vampire fangs, always blatantly visible and yet never commented upon by others, at all..

Mona, Ralph's girlfriend of centuries before was murdered by a pirate with a rhinestone peg leg, who dealt death with a large hambone. Since our protagonist did nothing to stop the murder, he's now cursed to have his love reborn every 22 years, only to be killed again — in the same bizarre way — when she reaches age 22. And, naturally, when he meets her again in this life, she's a sultry rocker whose heart can only be won by his own sultry rocking. This includes an entire number in a club which is entirely about how he is a vampire, and later abominably raps on the same subject (managing therein to rhyme William Safire with vampire). Understandable that people would take that as a joke, though, when so many rappers relay exaggerated histories of pimpin' and hustlin' — why not pimpin' and vampirin'? But when it comes time to convince his reincarnated gal pal that he really is a vampire, the most he can do is transform into a squat half-man half-bat looking thing. He twice pops up from getting hit by a car with no ill effect, and yet is easily bounced from a club, gets beat up by two random homeless dudes, and barely holds his own in a duel with the villain, Mona's spurned love interest Stanley — who, holy crap, is none other than Thomas "She Blinded Me With Science" Dolby, whose occupation seems to fluctuate between semi-abstract avant garde music video director and coffin/gravestone pitchman. Stanley, veritably, is more like a vampire in many of his coffinary interests and evil-plot tendencies. Even his automobile seems more appropriate as a vehicle for a vampire to be driving.

The final fight between Ralph and Stanley takes place in the back room of the central club for musical performances where Stanley (remember, he sells coffins, too) has set up a mist-filled cryogenic eternal hereafter storage chamber. Stanley gets the upper hand and is about to do Mona in, but then Ralph transforms into his pygmy half-man half-bat form, which simply surprises Stanley into falling over into his cryogenic coffin. Curse broken, bad guy defeated, lovers united, mother forgiven (forgiven? Oh yeah, turns out mother Phoebe was behind the curse thing all along, thinking no girl was good enough for her little vampirikins).

And, why yes, Bo Diddley also appears in the movie. Wearing all spandex.

With the exception of a few, the songs in this appropriately musical production range from camembert to cheddar in their cheesiness. Almost all pop, nothing really rocks with any kind of edge. There's the big power-ballad duet, which for some reason mostly takes place in a weird village-of-the-homeless (the existence of such a place, populated by equal parts thuggish men and precocious little girls, is actually the creepiest thing in the flick), all of which turns out to be a dream or a music-video within the film or some such directorial blip. Later, Phoebe sings what is arguably one of the best songs in the film, while wearing a cape and a corset, and being fawned over by a bald and mustachioed professional wrestler-type wearing a silver shirt and Scottish kilt. This song is then followed by a shortened version of Dolby's Budapest by Blimp, which had just been released around the time the movie entered production.