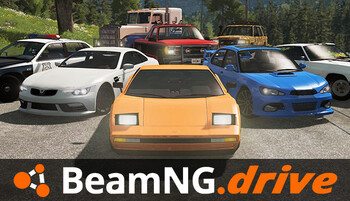 BeamNG.drivenote NG standing for "Next Generation" as it is the Spiritual Successor to Rigs Of Rods is a car game that makes use of "advanced softbody physics", which means a use of so-called beams and nodes to make up a vehicle (which can bend, deform and break from collisions). It is meant to be as realistic as possible when it comes to vehicle behaviour. BeamNG.drive is also very moddable and edit-friendly due to being built in the Torque 3D engine.