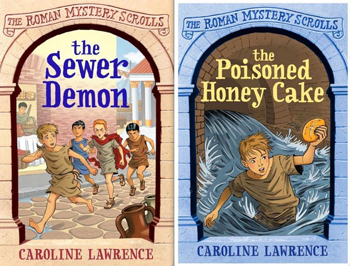 The Roman Mystery Scrolls follow the adventures of Threptus, a poor orphan living in the time of The Roman Empire. The character was introduced in the final book of The Roman Mysteries, where he is inspired by the character Lupus's Rags to Riches success and good works to learn to read, write and lead a life helping other people. Threptus gives up begging and become apprentice Floridius, a self-proclaimed soothsayer of dubious honesty. With the help of his unlikely mentor, he finds himself struggling to outwit the law and solve mysteries.

The series is a sequel to Caroline Lawrence's

The Roman Mysteries, however its target audience is somewhat younger. Caroline Lawerence is also the author of The Western Mysteries.