Video Game / Battle Of The Sands 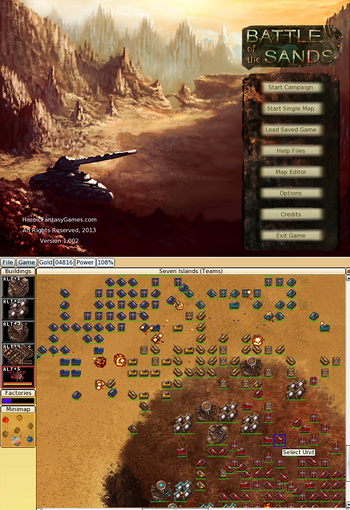 The future. Fossil fuels have been completely exhausted on Earth. Yet they remain essential for numerous human activities. Fortunately, vast resource deposits have been discovered on a desert planet in a colonised system. Six mega corporations are vying for control of these resources.
Advertisement:

As Director of Production of one of the six companies, it is your duty to repel the enemy factions and ascertain your monopoly. Should you be successful in this endeavour, you will be in an excellent position to claim the Megacorp Vice Presidency. Should you fail, your career will end abruptly, with consequences so disastrous they do not bear thinking about...

The above is the prologue text for Battle of the Sands, a 2D Real-Time Strategy game, and the deepest its story ever goes. It was created in 2013 by Pierre Begue, a French developer better known for his 2009 Western RPG Knights of the Chalice, and is currently only available from his website

It remains poorly known even amongst the people who played Knights of the Chalice due to its notable quirks. For instance, this is a strategy game where you only have a single unit type to do any strategy with. Another is its questionable presentation, whereas the game's window literally has scroll bars on both sides, like some office app, and the battle summary screen looks just like an Excel spreadsheet

Battle of the Sands features the following tropes: