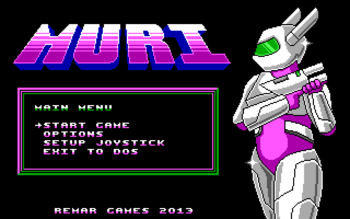 Muri is a game on Steam in the style of a 1980's MS-DOS game, complete with PC Speaker sounds, EGA graphics, and the game screen moving in blocks rather than smoothly. It was created by Daniel Remar, of Iji fame, and Ludosity.

After humanity colonized Mars, a research station orbiting the planet conducted controversial research on the nature of life — and death. Dubbed MURI, the project resulted in an armor suit of cataclysmic power. Kojo, son of the two head scientists, was equipped with the suit. The people of Earth and Mars, fearing Kojo to be a world-ending weapon, prepared their robot armies to destroy him and the research station. Yet as the Martian forces declared their attack, Mars suddenly vanished…

Unlike most games with multiple weapons, you're automatically forced to use your strongest weapon to defy Too Awesome to Use for weapons or to ensure you don't forget them.