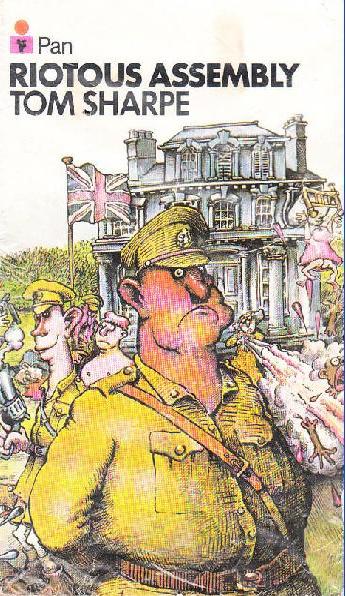 "Then again, when she looked around her, there didn't seem to be any significant difference between life in the mental hospital and life in South Africa as a whole. Black madmen did all the work, while white lunatics lounged around imagining they were God."
Advertisement:

A novel combining farce and satire by English comic writer Tom Sharpe, who was thrown out of The Apartheid Era South Africa for being a "subversive".

Employing a deft and very amusing mixture of slapstick comedy and extreme irony, Sharpe gives a lacerating account of the Hazelstone family's war against the cruelty and incompetence of the police force of a provincial town in South Africa during the apartheid era. From the lowliest member of the force, Konstabel Els, to the senior officer, Kommandant van Heerden, they are shown to be uniformly inept and unimaginative, and eventually come to rue the day they dared complain about the behavior of Miss Hazelstone or her brother, Bishop Hazelstone of Barotseland. The town of "Piemburg" is a thinly disguised version of Pietermauritzburg, where Sharpe lived and worked for ten years. Whether he is satirizing real people is up for debate, although it is known that one British-born Anglican bishop in South Africa who was opposed to apartheid had more than a usual parochial interest in the welfare of young African men in his flock. His name was not a million miles removed from "Hazelstone", either (See Roman à Clef, below).

Followed by the sequel Indecent Exposure.