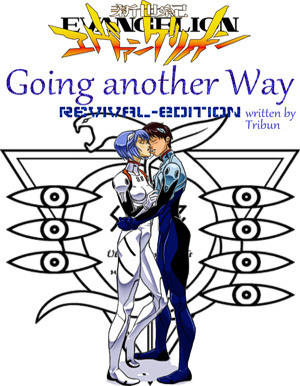 Shinji: You know, Rei, if this goes wrong we won't have any time to regret it.
Rei: Why do you think like this? Remember, I will protect you.
Shinji: Aren't you scared to die?
Rei: I'm replaceable, so it doesn't mean anything to me.
Shinji: Don't say something like that! You are not replaceable. Even if they clone you, it wouldn't really be you. Everything in there, (Shinji points to her head) everything that makes you who you are, would be lost forever. So don't think you have so little worth... Your life is precious.

is a Neon Genesis Evangelion fanfic written by Tribun.

This story is an Alternate Universe Fic retelling of Evangelion, starting with one major difference: what if Shinji was sent to live with and be raised by his uncle instead of his teacher? The end result is a more confident Shinji who doesn't take crap from anyone so easily. Things change very radically as time goes on, sort of in a reverse Butterfly of Doom. However, this change did not come out of nowhere, as there is someone who caused this change for the better.

Warning: This fic assumes you have finished watching all 26 episodes of the original series as well as End of Evangelion, along with referencing things/characters/events from supplementary materials (such as Mana Kirishima from the Girlfriend of Steel story). So if you don't want to be spoiled, watch them all before proceeding to this fic.

This is now a Completed Fic. Was completely revamped in 2017 in the REVIVAL-Edition. It is different enough that reading it again can be quite different from the original version.

There also is a small story called Impact Day

, which does related how the Ranma crew experienced the Second Impact hand how it changed their world.

The author has also written The Chosen Six and No Chance for Fate.