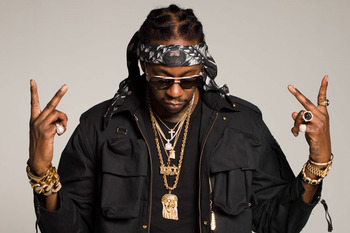 "'2 CHAIIIIIIIIIIIIINZ!"''
Tauheed Epps (born September 12, 1977), known professionally as 2 Chainz and formerly known as Tity Boi, is an American rapper and recording artist. Born in College Park, Georgia, he began to get recognition as being a half of Playaz Circle, a Southern hip hop duo. He was then signed to Ludacris' label Disturbing Tha Peace, best known for their single "Duffle Bag Boy".
Advertisement:

In 2012, 2 Chainz signed to Def Jam Recordings and released his debut album titled Based on a T.R.U. Story. From that album, "No Lie", "Birthday Song", and "I'm Different", all charted in the top 50 of the Billboard Hot 100.

All I want for my birthday is a Big Booty Trope: