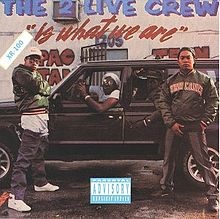 The 2 Live Crew is a Rap group from Miami that's mostly known for their plethora of Dirty Rap songs.

David "Mr. Mixx" Hobbs originally formed the 2 Live Crew with Fresh Kid Ice and Amazing V. They released their first single, "Revelation", in 1985. Amazing V left the group after that and was replaced by Brother Marquis. They caught the attention of Luther Campbell, a fellow rapper who had his own record label. Luther joined the group and signed them to his Luke Skyywalker Records, which put out their first album, The 2 Live Crew Is What We Are, in 1986. Through word of mouth alone, the album managed to sell enough to go gold. Another album, Move Somethin, followed in 1988.

By the time they released their double album As Nasty As They Wanna Be in 1989, the 2 Live Crew had gained nationwide notoriety for their bawdy lyrics and outrageous stage shows. Then they ran afoul of the law when Florida attorney Jack Thompson, on behalf of the American Family Association, sought to press obscenity charges on the group and ban their records from being sold in record stores. The legal battle went all the way to the federal appeals court, which ruled in favor of the 2 Live Crew and dropped the obscenity charges. The U.S. Supreme Court refused the appeal by the prosecutors after that. Amidst all the controversy, As Nasty As They Wanna Be sold two million copies.

The court battle led Luther Campbell to become an advocate for free speech, releasing Banned In The U.S.A. in 1990 to vent his frustrations with Moral Guardians and overprotective government. (But not without having to change the name of his label to Luke Records... that same year George Lucas successfully sued Luther to make him drop the "Luke Skyywalker" name.)

After releasing a follow-up album Sports Weekend in 1991, the group disbanded in 1992. Luke and Fresh Kid Ice tried re-forming "The New 2 Live Crew" in 1994 with rapper Verb, but the album they made had little commercial success. Fresh Kid Ice, Brother Marquis and Mr. Mixx then made Shake A Lil' Somethin in 1996 without Luke or his record label. Since then the 2 Live Crew has been a Revolving Door Band, with Fresh Kid Ice as the only constant. The second quote is there because, once the attention brought by the controversy died down, the media ignored them.

Not to be confused with the Leverage episode "The Two Live Crew Job."