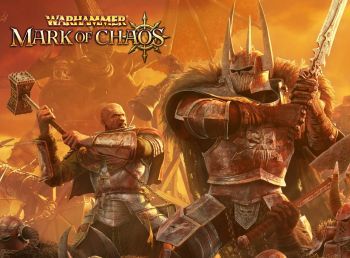 An Imperial War Priest of Sigmar and a Chaos Champion, teaching us that warring over religion is cool as hell.
"There is no escape from Chaos, it marks us all."
Advertisement:

Warhammer: Mark of Chaos is a Real-Time Tactics computer game by Black Hole Entertainment and co-published by Namco Bandai Games and released in November 14 2006 in the US, with a subsequent 23 November release in PAL territories. It is set in Games Workshop's wonderfully bleak and MANLY Warhammer Fantasy Battle universe. The gameplay is by and large a simplified version of Total Warnote  A comparison which becomes somewhat Hilarious in Hindsight considering what came later. The base game featured the Empire, the High Elves, the Warriors of Chaos and the Skaven as playable factions, with the Dwarfs and Greenskins also making an appearance as a limited roster of mercenary units, and the Vampire Counts also appearing as AI-only opponents for a few missions. An expansion, Battle March, was released 2nd September of 2008, which upgraded the Greenskins to a fully fledged faction with a full roster and added the Dark Elves as a new one.

The original game featured the very Germanic Empire and the mighty Norse-inspired and daemon worshiping Hordes of Chaos duking it out in a (pretty good) campaign written by Games Workshop's own Gavin Thorpe. The campaigns mainly feature the exploits of the troubled and driven Ostermark captain: Steffan Von Kessel, and the mighty and bloodthirsty Chaos Champion: Thorgar the Blooded One. And the various supporting characters and other races they recruit to aid them in their quests in an Old World set a year since the end of the Great War against Chaos, fought by Emperor Magnus against the Warlord Asavar Kul.

Stefan, the last scion the deposed ruling family of Ostermark, his father and grandfather executed for Chaos Worship and his own face branded with the titular Mark of Chaos leads the armies of Ostermark in a desperate bid to beat back the Northmen Hordes encroaching the Empire at the behest of the Count Otto Von Gruber. But he soon finds not that all is as it seems in the Empire.

Thorgar the Blooded One, a powerful Norse warrior and champion of the mighty Chaos Gods is visited by a herald of the Gods who tells him that his dread deities have set their gaze upon him and have chosen him to take up the mantle of the fallen Asavar Kul. Thorgar must unite the clans and warbands of the North into a mighty host that shall sweep aside his foes and ultimately bring about the End Times.

The expansion pack, Battle March, deals with the aftermath of the invasion of Thorgar (and it's not quite made clear who won) and the encroaching Greenskins who seek to take the scraps of what is left. Led by the brutal Warboss Gorebash and his shaman adviser Wazog; the Orcs and Goblins spill down from the mountains in a mighty WAAAGH! following a set of arcane signs leading them to battle, each leading to one more perilous than the last. Concurrently, the Dark Elves of Naggaroth use the chaos to launch their newest attack against their High Elven cousins of Ulthuan. But both factions are more entwined than they appear at first glance...

Besides the games themselves, Mark of Chaos received a novelization penned by Anthony Renolds. The games themselves received a mixed reception; primarily praise came from the game's impressive visuals and cinematic flair of combat. However criticism came from the lack of complexity in the actual gameplay and the glitch prone nature of multiplayer. Though this was fixed in later patches. Long loading times and a lack of faithfulness to Warhammer's in depth tactical gameplay were also cited. Nevertheless, the game was mostly well received, earning a 70% score on average and from some reviewers an 80. And proved popular enough to spawn an expansion.

Mark of Chaos, being a Warhammer Fantasy Battle game, takes it's own spin on its source material's wondrous background. For more information of these tropes and how they apply to Mark of Chaos, see Warhammer.

PRAISE THE GODS! BLOOD FOR THE BLOOD GOD!