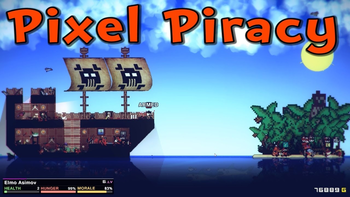 In Pixel Piracy, you take the role of the would-be captain of a feared pirate ship, on the journey to plunder and riches. Unfortunately, due to the Rogue Like genre's staple of Everything Trying to Kill You, everything from tribals to vicious animals to starvation to other pirates to your own crew can hinder your success or outright destroy you.