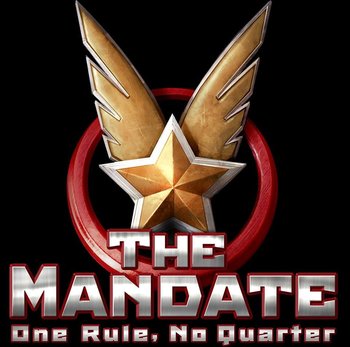 "One rule. No quarter."
Advertisement:

is a Space Opera RPG set several thousand years in Humanity's future. Made by Perihelion Interactive LLC and successfully funded by Kickstarter

, it aims to be a full Sci-Fi experience. Everything from player run fleets to starbases, and more. The trailer can be seen here

. The game was planned to be released in early 2016 as of this writing, but the game company has been dissolved

The story of the Mandate begins with the depletion of Earth's natural resources. In desperation Humanity began to evacuate by hollowing out asteroids and filling them full with colonists put in suspended animation. These slower than FTL colony ships eventually settled all over the galaxy and slowly Humanity began to rebuild. Eventually the descendants of one of the colony ships discovered the means of FTL travel by constructing a massive gate network. Through this way they subsumed all other existing colonies through a combination of peaceful trading and hostile takeover. In this way the Mandate was formed and the Empire took total control of the galaxy.

The game picks up with the current Emperor dead under mysterious circumstances its up to his daughter to take the throne. This meant she had to be the one to deal with a rebellion, so she sends the Grand Fleet to put it down. Unfortunately the gate network ends up sabotaged and the Grand Fleet scattered. The only hope that The Mandate now has is the player, a currently disgraced Captain.

As of 2017, the entire game has not updated and no information on the creators.