Fanfic / Those Gilded Chains We Wear 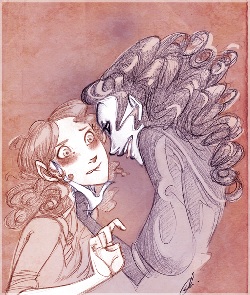 Those Gilded Chains We Wear

is a Harry Potter fanfiction by KuraiBites

During the hour-long break in the Final Battle at Hogwarts, Bellatrix Lestrange approaches Hermione with a possibility that she cannot refuse - Bellatrix's non-participation in the rest of the battle, depriving Voldemort of his most dangerous soldier and likely saving many lives. The price? An Unbreakable Vow to keep Bellatrix out of Azkaban, with the stipulation that should one die, so would the other. Thus begins a very natural and realistic take on how a romance between a muggleborn and an insane Death Eater would develop.

Tropes in this Fanfiction: