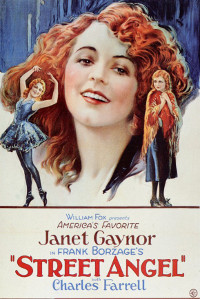 Everywhere... in every town, in every street... we pass, unknowing, human souls made great by love and adversity.
Advertisement:

Street Angel is a 1928 silent melodrama directed by Frank Borzage, starring Janet Gaynor and Charles Farrell. It tells the story of Angela (Janet Gaynor), a poor young girl from Naples whose mother is ill, and to pay for the medicine she decides to resort to prostitution. Before she actually gets a client, police catches her. She is sentenced to a year in prison, but flees with a traveling circus.

In circus she meets a young painter Gino (Charles Farrell) and falls in love. He paints Angela's portrait that captures her inner beauty and purity. After she injures her leg during a show, they leave circus and decide to settle down back in Naples.

Short on money, they sell the portrait to crooks who re-paint it into an icon of a saint, and sell it as a work by an Old Master. Meanwhile, Gino gets a big job to paint a mural for a theater, but at the same time a policeman recognizes Angela's face and comes to get her to prison, the very evening Gino asked her to marry him. Fearing that if Gino found out about her past, it would devastate him, and he wouldn't be able to paint anymore, Angela disappears without a word. It devastates Gino, and he can't paint anymore, so he loses the job and sinks into a depression, while Angela in jail is happy, believing her beloved is making great art.

Finally, Angela leaves the prison together with a prostitute Lisetta. Going to the theater, she learns what happened to Gino, finds their house empty and understands she has nowhere to go. Meanwhile, Lisetta meets Gino and tells him the truth about Angela, which makes him furious. Late at night, they both wander the docks and run into each other. Gino attacks Angela and chases her to a church where they see the painting of Angela as a saint. It helps Gino realize that Angela's inner beauty and purity are still with her. They reconcile, forgive each other and leave the church together.