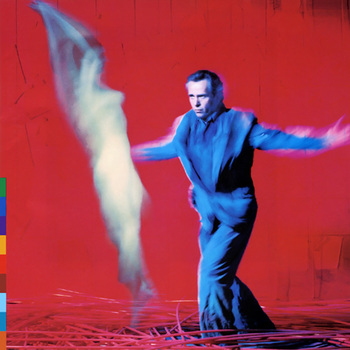 I feel it in my head, I feel it in my toes
I feel it in my sex, that's the place it goes
The wretched desert takes its form, the jackal proud and tight
In search of you I feel my way, through the slowest heaving night
Whatever fear invents, I swear it make no sense
I reach out through the border fence
Come down, come talk to me
—"Come Talk to Me"
Advertisement:

Us is the sixth studio album recorded by English musician Peter Gabriel. It was released through Real World Records in the United Kingdom, and Geffen Records in North America, on 28 September 1992.

Released six years after So, Us represents a refining of its predecessor's mix of worldbeat and art pop, presenting a somewhat more experimental sound that still remains accessible to fans who got into Gabriel's work through his 1986 megahit. It was his first proper studio album released through his Real World Records label, created following EMI's purchase of Virgin Records and the consequent absorption of Charisma Records shortly after So came outnote technically, 1989's Passion was Gabriel's first album on Real World Records, but that's typically classified more as a soundtrack than a studio album, thanks to much of it being written for and used in The Last Temptation of Christ.

Unlike the anthemic and relatively upbeat So, Us is a much more somber and introspective affair, influenced by Gabriel facing a multitude of degrading relationships in his personal life over the years. In particular, the album drew inspiration from Gabriel's failed first marriage, his breakup with actress Rosanna Arquette (who he had previously attempted to win back with "In Your Eyes" off of So), and his increasing estrangement from his first daughter. The end result is an album that reflects Gabriel feeling increasingly isolated from the people close to him, carrying an overall concept of collapsing relationships and the feelings of hollowness that result from them.

While not as big of a success as So, and despite being released long after the worldbeat boom had died out, Us still managed to peak at No. 2 on both the UK Albums chart and the Billboard 200. It would go on to become the 79th best-selling album of 1992 in the UK and the 81st best-selling album of 1993 in the US, and would be certified triple-platinum in Italy, double-platinum in Canada, platinum in the UK, the US, Australia, and Germany, double-gold in France, and gold in Argentina, New Zealand, Spain, and Sweden.

Us produced four singles: "Digging in the Dirt", "Steam", "Blood of Eden", and "Kiss That Frog"; "Come Talk to Me" and "Secret World" also saw release as promotional singles, and an early version of "Blood of Eden" featured in the 1991 Wim Wenders film Until the End of the World. Gabriel additionally supported the album throughout 1993 and 1994 via the extensive Secret World Live tour, which spawned both an eponymous live album and concert film in 1994. Us was also one of the first albums to be promoted via CD-ROM software, in the form of the video "game" Xplora1: Peter Gabriel's Secret World; the game featured a variety of puzzle minigames that could be used to unlock music videos and interviews associated with the album. While the idea of promoting music through interactive software would never catch on to the same extent as more conventional forms of advertising, video games would certainly not be entirely overlooked in the decades ahead, with artists such as Billy Idol, David Bowie, and Mike Oldfield all dabbling in the use of interactive software as a marketing strategy in Gabriel's footsteps.

Give me tropes, and how you feel could make it real: