Anime / Stand by Me Doraemon 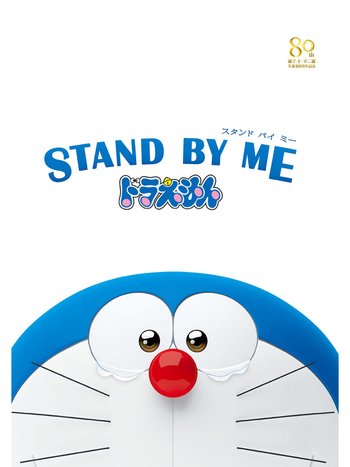 For everyone who has been a child...
Advertisement:

Stand by Me Doraemon is a CGI Doraemon movie released in 2014. It summarizes what Doraemon's all about, and it serves as a good introduction to the series.

It combines some of the most famous chapters of the comic into a complete story.note Specifically, it adapts the chapters 'All the Way From the Future World', 'Imprinting Shizuka', 'Goodbye, Shizuka', 'A Snowcapped Romance', 'The Night before Noby’s Wedding', 'Farewell Doraemon', and 'Welcome Back Doraemon'. Nobita "Noby" Nobi is a struggling fourth grader with a crummy life. Noby's great-great-grandson from the future, Sewashi "Soby" Nobi, builds the robot cat Doraemon. Doraemon goes back in time to steer Noby's life in the right direction with his wide variety of gadgets. Noby uses the gadgets for his own benefit and to get his Love Interest Shizuka "Sue" Minamoto interested in him. Eventually, Doraemon has to leave Noby and go back home.

This movie is one of the most successful Doraemon works. It grossed over $183 million worldwide, making it one of the highest-grossing anime films, and it won multiple awards. Bang Zoom! Entertainment produced an American English dub of the movie, though the dub was initially only distributed in Asia (the film was finally released on Netflix in the US on December 24, 2021). In fact, the movie was so successful that it obtained its own sequel film in 2020. (Netflix released that film outside Japan and Southwest Asia also on December 24, 2021.)

This movie borrows most of its tropes from the manga chapters it adapts (see the note above), but it also adds in some tropes of its own.

Tropes unique to Stand by Me Doraemon: