Series / The Box of Delights 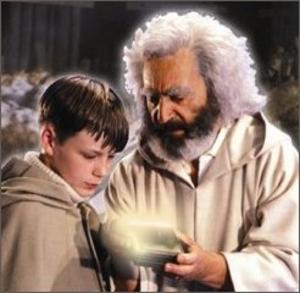 "The wolves are running..."
Advertisement:

The Box of Delights is a Live Action TV Show based on a children's fantasy novel by John Masefield, first published in 1935.

Schoolboy Kay Harker is going home for the Christmas holidays. On the train he meets Cole Hawlings (Patrick Troughton), a travelling Punch and Judy man who claims to be Older Than He Looks, and two clergymen with long names who rob him then turn into wolves.

When he gets back home he finds himself landed with the Jones Children who have been abandoned by their parents, and later the nefarious Abner Brown who wants to find Hawlings and steal his Box of Delights. Fortunately Hawlings escapes into a painting on a donkey, meets Kay in a dream and gives him the box. But all is still not well.

On his way to saving Christmas (or the Christmas celebration at Tatchester Cathedral) Kay meets giant mice, Pagan Gods, an evil governess, a cult, a boy in a waterfall and a Caroplane-Aeroplane.

The Box of Delights is a cult Christmas classic to the point where many people know whole sections off by heart. It's comparable to early Doctor Who (for more than one reason) if it had been directed by David Lynch in a good mood. It's also similar, if only in tone, to the BBC Narnia adaptations which were made around the same time and also for Christmas showings.

Fans are known as Boxers and can be recognised by their reactions to mentions of the Purple Pim. The haunting theme music is an excerpt from Victor Hely-Hutchinson's "Carol Symphony" - the full symphony can be found here

- the sequence used in the series starts around the 12:30 mark.