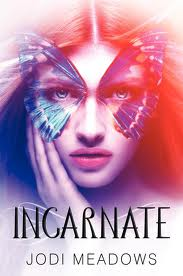 The Incarnate Trilogy is a series of books by Jodi Meadows.

Ana is new. For thousands of years in Range, a million souls have been reincarnated over and over, keeping their memories and experiences from previous lifetimes. When Ana was born, another soul vanished, and no one knows why.

Ana’s mother thinks she’s a nosoul, an omen of worse things to come, and has kept her away from society. To escape her seclusion and learn whether she’ll be reincarnated, Ana travels to the city of Heart, but its citizens are suspicious and afraid of what her presence means. However, she also meets Sam, a young man who believes her soul has worth—but can he love her knowing Ana may only live once?

Not to be confused with the comic Incarnate.