Comic Book / Doctor Who: Supremacy of the Cybermen 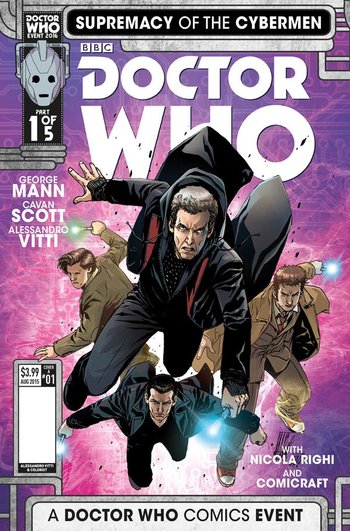 Spoiler warning: This comic book follows up on certain events of the Series 9 finale of the Doctor Who television series, "Hell Bent". Those who have not yet seen it may wish to avoid this story and the following list of tropes to avoid many Late Arrival Spoilers, all of which are unmarked below.
Advertisement:

The second Doctor Who (Titan) crossover miniseries, written by George Mann and Cavan Scott, is a five-issue story that launched July 6, 2016 (intended as a biweekly release, it suffered Schedule Slip starting with Part Two). It's a 50th anniversary Milestone Celebration for one of the franchise's most popular recurring villains, the Cybermen, who first appeared in the 1966 First Doctor serial "The Tenth Planet". The story is set within the "Year Two" continuity of the Tenth, Eleventh, and Twelfth Doctor Titan Comics titles, and incorporates the new Ninth Doctor title as well. (In addition, prologues published in other Doctor Who (Titan) ongoing series details how it affects all Doctors from the Classic series.)

Somewhere at the end of time, the very last Cybermen have a new leader: the disgraced, exiled co-founder of Time Lord society, Rassilon. Now cyber-converted, Rassilon retakes Gallifrey and the Cybermen are now using time travel to rewrite the history of the universe, creating one in which they have conquered all other beings.

The Twelfth Doctor, tragically, had a key role in the events that led to this unfolding catastrophe: He was the man who bloodlessly overthrew Rassilon when he returned to Gallifrey "the long way 'round", after a horrifying ordeal at his hands that also claimed the life of his beloved companion Claranote Oddly, however, the story makes no reference to Clara. Although the Doctor's memories of her have been suppressed, the same shouldn't be true of the Time Lords and Ohila. Now he is in a very different universe...as are his previous selves and their respective companions/associates: in particular, Nine with Rose and Jackie Tyler and Captain Jack Harkness, Ten with Gabby Gonzalez and Cindy Wu, and Eleven with Alice. How can things be set to rights?