Ride / Revenge of the Mummy 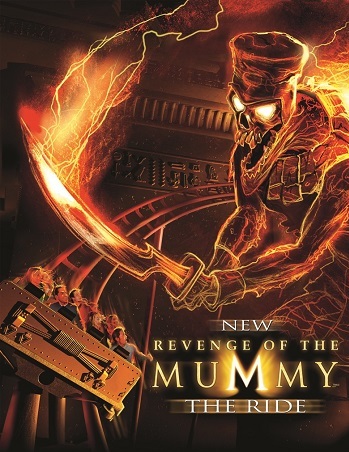 "Serve me and savor riches beyond measure... or refuse, and savor a more bitter treasure!"
— Imhotep
Advertisement:

Revenge of the Mummy is a roller coaster/dark ride hybrid attraction that can be found at the Universal Studios parks in Florida, Hollywood, and Singapore. The ride itself is a spin-off of The Mummy Trilogy and deals with Imhotep once again breaking out of his supernatural bonds and terrorizing the riders of the attraction, ordering them to either join him or die. The storyline of the attraction varies across each version of the attraction.

In Florida's version, the story is that a new Mummy film is being filmed inside the park, but due to the use of actual Egyptian artifacts in the set, Imhotep is brought to life for real.

Hollywood's version is much more straightforward - with it being that the guests are entering an Egyptian tomb, where via a curse Imhotep returns once again for his revenge. Singapore's story is similar to Hollywood's, but adds in an extra bit that the riders need to find "The Book of the Living" in order to stop the evil priest.

Revenge of the Mummy provides examples of the following tropes:

open/close all folders
All Versions
Florida Version
Advertisement:
Hollywood Version
Singapore Version
"Hey, welcome back! Hope you enjoyed yourself, I would have enjoyed this interview a lot more if I HAD GOT MY CUP OF COFFEE!!!"