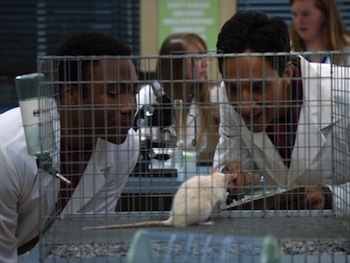 And this was BEFORE it got in his pants, people.
Advertisement:

In the aftermath of his wife leaving him, Chang becomes increasingly petty and spiteful towards his students, culminating in a twenty-page essay written entirely in Spanish. The study group persuades Jeff to approach Chang and persuade him to back-off a bit, but he's soon tempted to put personal gain over the good of the majority. On top of this Troy and Abed are having difficulties training their lab rat thanks to Troy's fear of rats, and Shirley is nervous about an upcoming presentation, which leads her in desperation to consult Pierce's advice.