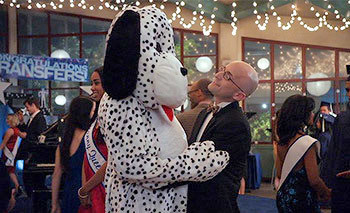 After Britta is nominated for queen of the Transfer Dance, Professor Slater admits to Jeff that she misses him and wants to get back together. Troy's dad asks him to move out of the house, and Troy begins hoping to move in with Abed, although Abed rejects the idea.

The next day, at the Transfer Dance, Pierce offers Troy a place to live, but he still wants to live with Abed. Abed later explains to him that their personalities would clash if they roomed together and they would jump the shark. Annie reveals to the group that Vaughn has been selected for a competitive Hacky Sack team in Delaware and will be leaving for the summer, but she secretly tells Jeff that the move is permanent and she will not be coming back to Greendale.

In a separate storyline, Chang plans to beat up Duncan, who mocked him for being fired when Chang turned to Duncan for help cheating his way to re-obtaining his degree. Chang however cannot go through with the beating, since he would be expelled for hitting a member of the Greendale staff.

At the dance, however, Duncan becomes drunk and broadcasts Dean Pelton's "dalmatian fetish", resulting in Duncan's suspension. Chang seizes the opportunity and punches him in the face with a roll of quarters. During the dance, Britta publicly admits her love to Jeff. Professor Slater also announces the same statement. Jeff, unsure how to respond, leaves the dance only to bump into Annie who changed her mind about leaving. After the two each share their respective conflicted emotions, Annie gives Jeff a small kiss, and Jeff responds with a bigger one as the two embrace.

Has a YMMV and Trivia page.