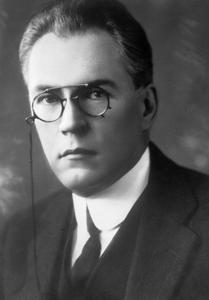 James Branch Cabell (April 14, 1879 – May 5, 1958) was an American fantasy author at the beginning of the twentieth century. Although not widely known today, in his time his dreamy yet snarky tales of adventure were highly regarded; his popularity declined with the Second World War, because as Alfred Kazin put it, "Cabell and Hitler did not inhabit the same universe." His works were a huge influence on such modern luminaries as Robert A. Heinlein and Neil Gaiman. Most of his work, including his most famous works Jurgen, A Comedy of Justice and the multi-volume Biography of Manuel, are available at Project Gutenberg.

His best known quote is the page quote for several tropes: "The optimist proclaims that we live in the best of all possible worlds; and the pessimist fears this is true." Although Cabell's surname is often mispronounced "Ka-BELL", he himself pronounced it "CAB-ble." To remind an editor of the correct pronunciation, Cabell composed this rhyme: "Tell the rabble my name is Cabell."