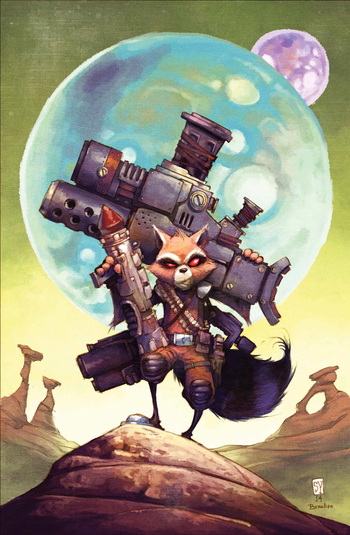 Partially inspired by the song "Rocky Raccoon" by The Beatles, Rocket mostly served as a joke character for the majority of his existence in the Marvel Universe, only appearing in ten issues over thirty years.

It wasn't until the Annihilation: Conquest event that Rocket would gain some prominence, showing up as a supporting character in the Star-Lord tie-in series. His role there then segued into the rebooted Guardians of the Galaxy title, where he'd establish himself as a prominent member of the team, appearing in just about every iteration of the lineup ever since.

Rocket is notable for his deceptively scrappy attitude, extensive knowledge of weaponry, and plentiful connections in the cosmic underworld. He's also become synonymous for his friendship with sentient tree Groot since Annihilation: Conquest, and they're rarely seen apart from one another.

Because of his popularity with audiences, Rocket appears in most interpretations of Guardians of the Galaxy in other media. He made his first appearance outside of the comics in The Avengers: Earth's Mightiest Heroes on Disney XD, where he was voiced by Greg Ellis. He also appeared on the Guardians of the Galaxy (2015) cartoon on Disney XD, voiced there by Trevor Devall, while Nolan North portrays him in Guardians of the Galaxy: The Telltale Series. Rocket is also voiced by Bradley Cooper (with motion capture performed by Sean Gunn) in the Marvel Cinematic Universe, making his debut in their 2014 film of the same name. Cooper and Gunn reprise the role in its 2017 sequel, as well as Avengers: Infinity War and Avengers: Endgame. 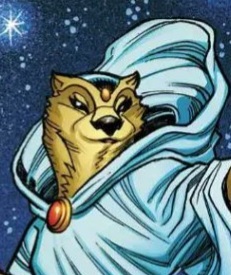 Another Halfworlder, Lylla is a sapient otter and Rocket's soulmate. She was the heiress to the largest toy company on Halfworld and basically served as the Damsel in Distress for Rocket to save in his original mini-series. 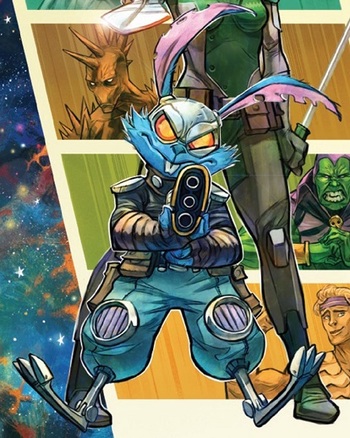 A genetically uplifted cyborg rabbit mercenary from Halfworld. Blackjack has been Rocket Raccoon's rival since his earliest adventures. He spent decades alternating between opposing and teaming up with Rocket depending on the situation. He joins the Guardians as a member of their West Spiral Arms team. 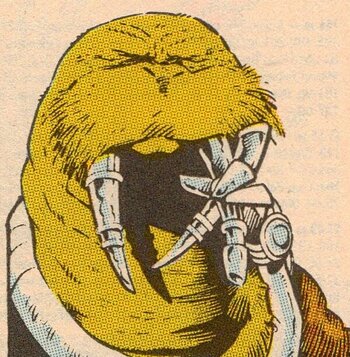 A sapient walrus from Halfworld. He's a genius engineer who helps out Rocket by designing technology for him. 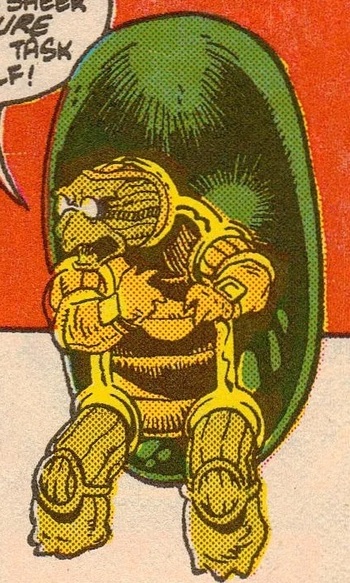 A sapient turtle and one of the chief toymakers of Halfworld. He's an inventor and master engineer for Judson Jakes. He created the Spacewheel, a giant space station, for Jakes' headquarters and the Killer Clowns, murderous cyborgs used by Jakes. 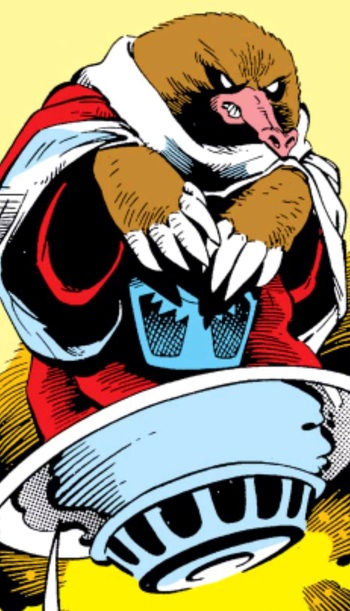 A sapient mole and the head of one the largest toy-making companies on Halfworld, Judson Jakes wanted to expand his company to completely dominate all of Halfworld. That meant taking over other toy companies, like the ones run by Lylla's parents.

Or maybe that's one of Rocket's false memories and maybe Judson was a doctor at the Halfworld Asylum for the Criminally Insane. 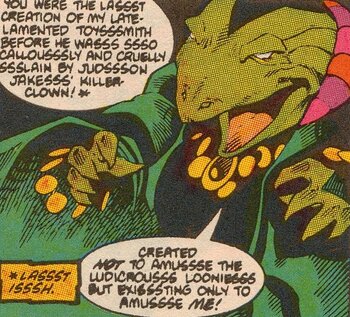 A sapient reptile and one of the biggest business-creatures on Halfworld, Lord Dyvyne was Judson Jakes' chief rival and enemy of Rocket Raccoon. 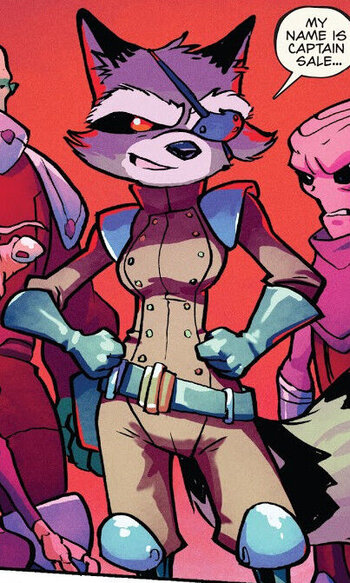 Another genetically modified raccoon-like creature from Halfworld like Rocket, Sale became a captain of her own ship and crew, all while wandering the cosmos trying to find clues about her species' past. She comes across Rocket when she learns he's after the Book of Halfworld. 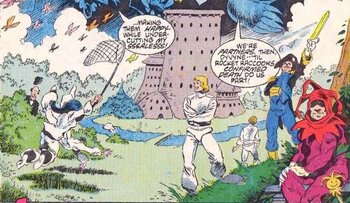 Long ago, a group of humanoids came to the Keystone Quadrant and set up Halfworld as the whole for members of their race who were considered insane. When funding ran out, the humanoids simply left the insane on Halfworld to be taken care of by robotic servants, but the robotic servants soon became self-aware and uplifted the local animals to serve as companions for the Loonies, as they called them. 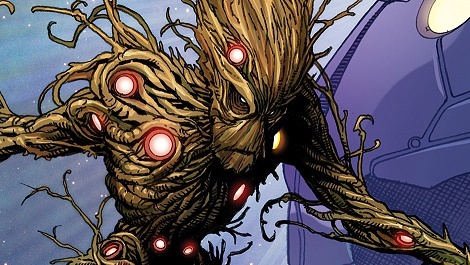 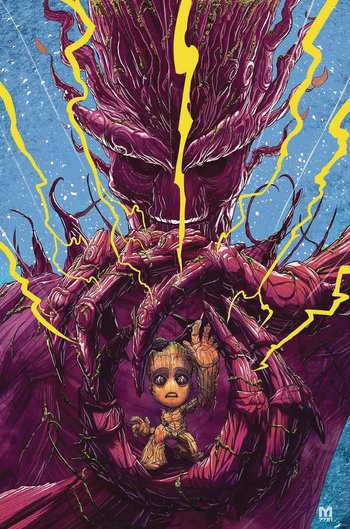 I am Groot.
"I am Groot
— Groot, Whenever he speaks

Groot is an extraterrestrial, sentient tree-like creature, and the monarch of Planet X. He is a founding member of Star-Lord's Guardians of the Galaxy, and is known for his longtime friendship with Rocket Raccoon. 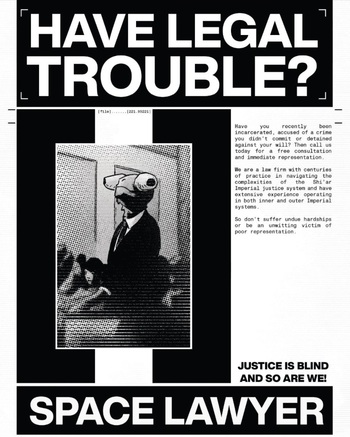 A space lawyer who is a member of the race of Echomelians. The Echomelians are all blind (they have no eyes), but they have echolocation; however, due to being struck by radioactive originium as a child, Murd lost his echolocation, but grew two growths on his face. Unbeknownst to his friend Froggy Frelson (but knownst to us), Murd is actually the Seeing Being, the Sentient Without Self-Preservation. He tries to represent Rocket during his trial, but instead decides to run away with an Elektra-like Echomelian to fight ninjas.

A space lawyer and Murd Blurdock's law partner. He is often left along in court due to his partner's mysterious vanishings. But Blurd couldn't be the Seeing Being — because the Seeing Being was Blurd's twin brother all along! 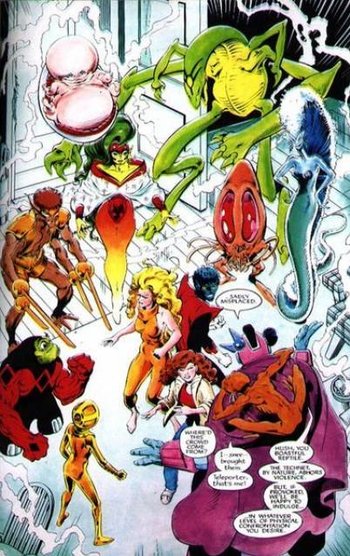 Technet was a team of bounty hunters from various extradimensional worlds. For a price, Technet would hunt and capture fugitives, rescue prisoners from captivity, or recover objects of value. The scope of the Technet extended across multiple worlds and dimensions.

A sapient otter, like Lady Lylla, who hires Rocket to steal the deed to Tarka's World to save it from Beavertron Incorporated . However, she betrays him and it turns out that she just wants to sell the deed to Beaverton. 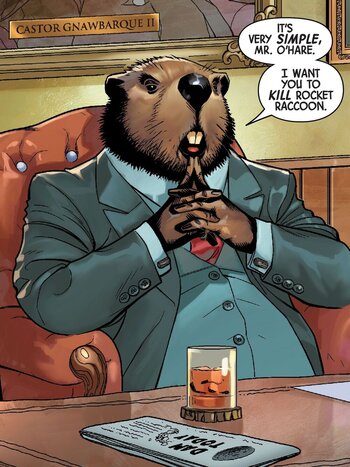 The head of Beavertron Incorporated. He wants to get his hands on the deed to Tarka's World, since that's the only way he can strip mine it. After Rocket stops him, he ends up hiring Blackhack O'Hare to kill Rocket in Guardians of the Galaxy (2020). 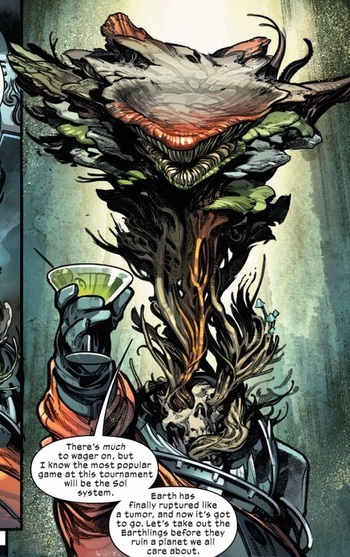 Cordyceps Jones is a sentient Cordyceps fungus and an interplanetary mobster. Rocket steals money from him with the help of Deadpool (since Deadpool's healing factor makes him immune to the fungus). Cordyceps later shows up in X-Men (2021) as the head of Gameworld, with the game being "Who can kill all the humans on Earth fastest?"