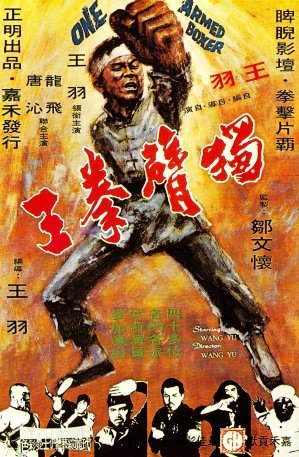 Jimmy Wang Yu is about to punch you. Into the stratosphere.
Advertisement:

The somewhat forgotten film that preceded Master of the Flying Guillotine.

One-Armed Boxer is a 1972 Martial Arts Movie starring Jimmy Wang Yu, in his directorial debut. Much like Jimmy's earlier martial arts epic, One-Armed Swordsman, once again Jimmy plays a righteous martial artist who lose his arm, and puts himself through rigorous training to make himself stronger, deadlier, and to exact revenge over those who wronged him.

Jimmy Wang-yu stars as Tien Lung, the best martial artist of his school, who out of chivalry, stopped a gang of bullies from the Hook Gang - a rival martial arts school secretly involved with opium dealing and trafficking - from terrorizing a restaurant. In retaliation, Master Chao of the Hook Gang hired the best and most sadistic fighters from Shanghai to go on a killing spree, leaving Tien Lung the sole survivor of his school and losing his arm to a Japanese fighter in the process. After being rescued by a herbalist, Tien swears to avenge his defeat and have the Hook Gang put to justice.

Wang-yu will later star and direct the much more popular, Surprisingly Improved Sequel, Master of the Flying Guillotine. The combined popularity of both films proves to studios that Wang-yu can direct, besides act.

Released in the United States as The Chinese Professionals.

One Armed Boxer provides examples of: