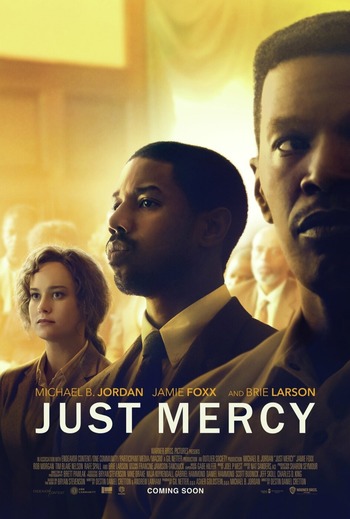 Every generation has its hero. Meet ours.
"I understand a lot of time has gone by, but I personally believe that it’s never too late for justice.”
—Bryan Stevenson
Advertisement:

Just Mercy is a 2019 legal drama directed by Destin Daniel Cretton. The film is based on the true life case of Walter McMillian.

The film follows Harvard law graduate Bryan Stevenson, who moves to Alabama to defend those who were wrongly convicted or provided insufficient legal representation. Among his clients is Walter McMillian, a black man on death row for the murder of an 18-year-old white girl. After reading through McMillian's file, it becomes exceedingly obvious to Stevenson that the case against McMillian was utterly laughable and was fueled entirely by prejudice. From there, he makes an effort to reopen the case against McMillian and provide the man with justice, but is faced with heavy resistance from the locals.